Three Mix-down Techniques That Change Everything 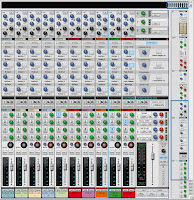 Making electronic music has been my hobby for many years now. I'm no proper musician, though, and  that's probably the reason why techno suits me so well. This style is usually not about complex melodies and strong lyrics. It's all about making your rhythms sound right and getting your synthesizers to produce something nobody has ever heard before. It's the music of sound engineers.

These are the aspects which have been the most interesting to me and I still find myself learning new ways to do things. I won't talk here about common knowledge like equalization, compression or other basic effects. I believe one can easily find all the information he needs in search engines and Youtube.

Instead, today I'd like to write down three mix-down techniques, that I've picked up over the years and which, although being pretty simple concepts, didn't seem at all that obvious to me, until I learned about them.
1. Using delay effect to create stereo.

A while ago, when I was just starting out, but was already comfortable with all the basic effects, I found myself struggling to figure out, how do they make that proper stereo. I tried many things, but nothing would really allow me to take a mono sound and spread it out, so it would fill both channels.

I found my answer in "The Art of Mixing" by David Gibson. As author suggests, if you take a mono sound and delay one of the channels for less than 30 ms, your brain will get tricked and it will interpret it to still be the same one sound, but it will seem to be wide spread across the room, instead of being concentrated right in the middle.

It's as simple as that. Of course, you have to watch out for introducing too much anti-phase. There are various techniques to fight it, but the simplest way I've found is, that case by case it is usually possible to find the right settings, just by putting your headphones on and adjusting delay's interval until it doesn't feel, like your brains are being sucked out of one of your ears.

If applying this effect to some sound source makes it seem to be little on the right or left, you can always compensate this by delaying some other sound source's opposite channel, thus conquering the space and making your mix sound almost three dimensional.

UPDATE: I should probably mention, that another, easier way to achieve stereo is by applying chorus on your mono channel. Delaying technique let's you get more widespread sound, though, leaving it almost empty in the middle.

You should never do this to a drum kick, though, as this will never sound right. And, actually, you should never apply this to anything below 275 Hz, if you're ever considering your track might end up on the vinyl.

I remember spending hours and hours equalizing and leveling channels to find that perfect balance that would sound good, without one sound canceling out others. Until one day I was talking to my friend Kristaps (known as NGC-5128) and he told me this one little trick.

If you take your kick and bass and everything else that is important in your track and feed it into side-chain input of a compressor, applied to all other sounds, then your important front sounds will never get eaten up by those other background sounds. Wow.

I was using Reason 5 by the time and I remember creating this Combinator patch utilizing three mixers and couple of compressors. It would allow me to have sort of like three layers of sound. First one would generally be used for the main kick and maybe for some other crackles or clicks that would occur rarely during the track and which I would want to be sticking out.

The second layer, covered by compressor fed with first one's output, would get all the middle sounds, hit-hats, bass, short pads and everything.

And the third layer would collect exclusively long lasting background sounds and pads and would have two compressors on it, one chained from the first layer, one from the second.

Important thing to note, you don't do side-chain compression on auxiliary channels (I usually have set up send/return through at least one reverb). I've found, that if you do that, your track will sound dry and lifeless.

Otherwise, this concept allows you to take any piece, choose which channels go where and quickly have it sound loud and clear, making all channel leveling happen automatically.

Of course, I've been carrying on using this technique in further versions of Reason (throwing away my Combinator patch and hooking everything up with the dedicated mixer) and recently employing it in Live, too.

This third technique is something that I've discovered accidentally just last week through the Reason 7 demo video:

Sometimes, when you've got some instrument or sample, which sounds bleak or boxy for some reason, and you equalize and compress the hell out of it, and try adding all the choruses, echos and reverbs, but it still remains somewhat unimpressive, then so called "parallel processing" can help.

It's the simplest thing, just take the original channel and feed it into one or more parallel channels, than apply different eq and compression settings, getting every channel to supplement for something you find missing in the original signal. I won't go in any more details here, just say, after playing around with this approach for couple of hours I feel already that it can help in so many situations. So, watching the video is highly recommended.

In conclucion, I can say that at last I start feeling somewhat confident about myself and believe, that with little more practice I'll be able to take just about any track and make it sound BIG. I hope this post helps you to take your sound to the next level, too!

P.S. you can check out how do the first two techniques sound in practice by listening to my tracks at substance.org.lv and soundcloud.com ;]
Posted by drone at 14:24