I've been spending some time recently working on my audio setup, figuring out what is the best way to utilize all my hardware and software, both for everyday use at home and for live performances at gigs.

Part of the plan was to find the perfect combination of legitimate software components, even if this would mean to buy some of them. I do already own a stripped down version of WaveLab and an iZotope Ozone 4 plugin. Both of them use different tricky authorization procedures, but still, downloading, installing and figuring out the activation takes few minutes.

Now, when I watched some of the Reason 6 feature videos, I was pretty impressed by all the new features. It's  still pretty costly, but it seemed that the software might even be worth it. Until I discovered that it requires a dongle or an active internet connection to operate!

Quick peak at Reason's FAQ and what do we see there? There are questions like "Reason doesn't see my Ignition Key!", "Reason say my Ignition Key driver installation fails!". So, obviously, this dongle or the "ignition key", as they call it, is actually a useless piece of hardware and from user's point of view it's only function is to cause Reason to not work when you least expect it.

If the idea is to use Reason's instruments for live performances, it would be insane to add such a weak link to the system. There are plenty of things that can go wrong already! Congratulations, Propellerheads, you've just lost a customer!

Next big disappointment was Waves. They offer a wide range of different VST-plugins, among them are the L3 Multimaximizer series.

Unfortunately, you can't even get a demo version without buying the 50$ ilok dongle and waiting for it to arrive.

Needless to say, this dongle is not compatible with Reason's "Ignition Key", so this means already two useless pieces of hardware sticking out of your computer.

It seems pretty obvious, that dongle-protected luxury software for a few hundred dollars is only applicable for a serious operation, in a professional studio environment, where it is actually used to generate revenue. 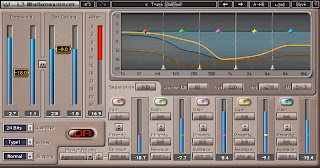 I'm not a business man, but it seems to me that the idea of selling lighter version of the software, dongle-less and like 10-times cheaper would actually generate a lot of income for these companies, as it would reach much wider audience.

Well designed "download, install, try and buy" path can easily beat the software "piracy", given that the price is affordable enough. I'm certain that 90% of a users will always choose the easiest and safest way to get things done.

Steinberg has realized this and as a result I own WaveLab Elements. Another good real-life example is the Steam platform. I had never even thought about buying a computer game before Half-life 2 came out.

I hope Propellerheads and Waves will realize this too, before they're put out of business.

UPDATE: After playing around with Reason 6 I realized that they actually do allow saving and opening Combinator patches in demo mode, which is basically all I need when using it in combination with Ableton Live. One might wonder why do I even need it at all? Well, Reason has some pretty nice synthesizers and effects and a neat way of organizing them into Combinator patches like described here.

UPDATE2: Waves has dropped the need for iLok with the release of Waves Version 9. I am now a happy owner of L3 Multimaximizer.

UPDATE3: I've upgraded to Reason 7 now and also managed to install it on my laptop. It appears that the dongle is no longer required and you can transfer the licence on-to your computer's hard drive too.